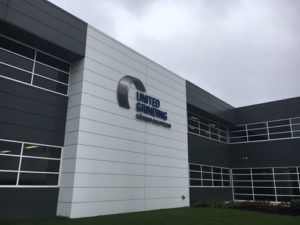 Miamisburg has been home to UNITED GRINDING for more than 25 years. During this time, the company and city management have developed a close strategic partnership in order to impact positive outcomes for both the residents of Miamisburg and surrounding communities, as well as the business itself. The City of Miamisburg demonstrated the strength of that commitment when UNITED GRINDING was sourcing new sites for its brand new, 110,000 sq. ft. North American Headquarters.

The City helped the company identify a highly visible greenfield site along I-75 at Austin Center. City staff were able to bring resources, not only from the City, but also from the State of Ohio and Montgomery County to the project in order to help UNITED GRINDING secure support for the project from their parent company. Part of the City’s commitment to the project was the construction of a new roadway to provide improved access to the site. Utilizing the services of the Montgomery County Transportation Improvement District, the City was able to design and complete construction of the roadway in time for UNITED GRINDING’s ribbon cutting for the new facility. UNITED GRINDING invested $13M in the new facility and will create or retain over 140, high-paying jobs within the community.

“UNITED GRINDING North America is proud to be part of the Miamisburg community. We are honored to be able to enrich the lives of our employees, and create economic opportunity for Miamisburg, and the Greater Miami Valley region.” – Steve Jacobson, CEO